We love Africa and Africa loves us

We love Africa and Africa loves us continues from where Conte d’Amour ended. 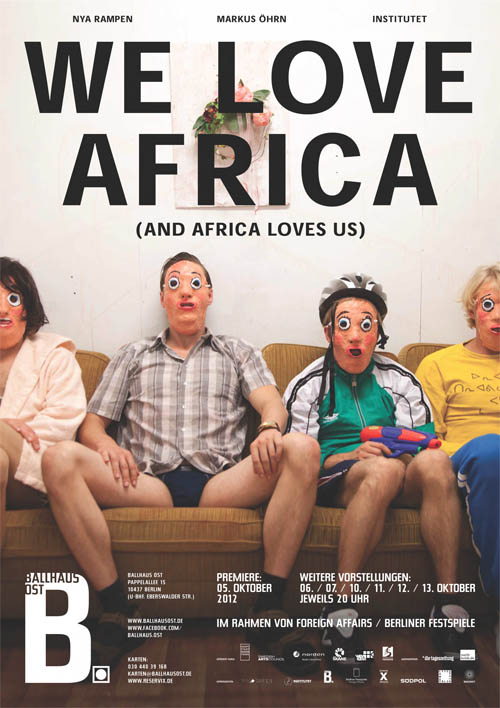 “Daddy” is caught in a crisis. The family has managed to escape the horrors of Joseph Fritzl’s cellar, now daily routine dominates life. The division of social roles has been weakened by middle-class, westernized ways of life: daddy still might be head of his family, the provider and protector of women and children, but he has been ‘castrated’ by society’s lack of recognition for his role as patriarch and feels restricted in the implementation of the family project. We love Africa and Africa loves us takes up where Conte d’Amour left off. While Conte d’Amour described the story of a vertical “stepping down” in the cellar of romantic love, in this new production by Markus Öhrn [Niskanpää/Berlin], Institutet [Malmö/Berlin] and Nya Rampen [Helsinki/Berlin] the family has managed to make it to the ground floor. From here – a kind of ground zero of modern democracy – its members try to find external justification for the internal psychology. Western images of Africa as an unknown, wild, authentic place in need of aid conveniently lend it the ‘otherness’ the white family needs to redefine and inspire its conventions. We love Africa and Africa loves us projects ideals of white nuclear families onto the dynamics involved in humanitarian aid for the so-called Third World. This drama about the relationship between helpers and the helped turns post-colonial and racist attitudes into hegemonic, patriarchal fantasies of omnipotence. A projection of inner chaos onto a distant continent called Africa – and a journey to the heart of European darkness.